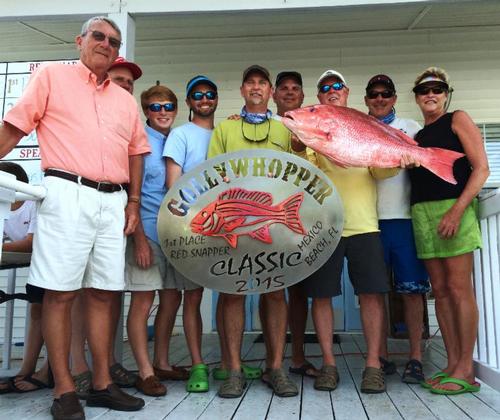 The 4th Annual GollyWhopper Classic in Mexico Beach had a record turnout and new tournament records were caught for both Red Snapper and King Mackerel. The federal season for Red Snapper was not set until early May and there was very little time to plan this year’s tournament.  A new location was also needed for the tournament to take place during Federal Season.  The tournament was minutes away from not taking place in 2015 before Kimberly Shoaf of the Mexico Beach CDC volunteered their support and use of the Mexico Beach Welcome Center for the Captain’s Party and Weigh-in.  Kimberly joined new Tournament Director Lee Cathey and founder Josh Bloodworth and went to work planning and preparing for a successful tournament.

The tournament was held on June 6th with the weigh-in and Captain’s Party at the Mexico Beach Welcome Center.  There was a great turnout for both events with 62 boats entering the fishing division for the biggest Red Snapper and King Mackerel.  The tournament cost $150 per boat to enter and pays out over 100% of the entry fees to the winners.  There were an additional 12 divers that entered the spearfishing division ($35/each) and 10 individual youths ($25/each) 14 & under in the youth fishing division.  A group of sponsors created bonus categories for this year’s tournament and agreed to pay a $1,500 bonus to the first King weighed in that was over 50lbs and $1,500 to the first Red Snapper over 30lbs.  By the time all of the fish had been weighed and the winners were paid on Saturday afternoon, $11,865 was paid out in cash prizes.

The waters off of Mexico Beach are known for world class Red Snapper fishing.  The Mexico Beach Artificial Reef Association has deployed over $1,000,000 of artificial reefs and continue to make it even better and better.  With so many big Red Snapper being caught, many people said the winner would have to get lucky and bring in the biggest snapper ever caught in the tournament.  While this proved to be true, the 2014 Red Snapper winners proved it’s about more than luck.  Each of the winning teams placed again in 2015. Despite fishing against almost twice as many competing boats in 2015, Captain Don Spillers and Team Perfect Bite from Fort Valley, Georgia have won the Red Snapper Division in 2014 and again in 2015.  Don’s son Trey was the angler that landed the winning fish this year. The custom trophies were made and donated by Brian Cathey of Cathey Construction.

Captain Stephen Price of Port St. Joe has entered the smallest boat in the tournament each of the last 2 years. He was only one tenth of a pound from winning first this year with his 25.15lb pound fish.  Stephen and his 19′ Cape Horn finished 3rd in 2014 and were only .06lbs  pounds from 2nd place which was won by Team SouthPaw.  Team SouthPaw with Captains Steven Childs and Landin Marzolf from Bainbridge, Geogia placed 3rd this year with 20.45lbs.  Captain Spillers’ 25.25lb fish beat his own tournament record for a Red Snapper caught on hook and line that was set in 2014 at 23lbs.  Dennis Menard from Lenox, Georgia won the spearfishing division with a stud 25.15lb Snapper.  The tournament record for largest Red Snapper ever speared or caught is still owned by Regina Capps who speared a 26.72lb fish in 2014.  Youth participants can weigh either a King or Red Snapper and the winning fish in 2015 was 19.6lb Red Snapper caught by 11 year old Alec Bloodworth.

Captain Jackson Krause and Team Flippin Out fishing out of Cordele, Georgia  set a new tournament record as well.  They are also back to back champions winning the King Mackerel division each of the last 2 years.  Their 53.75lb smoker earned them the $1,500 bonus and a total first prize of $3,825.  Team Salt Life and Captain Craig Bishop from Panama City placed 2nd with a very respectable 40.6lb King and Team Catchulater and Captain Joe Rodgers from Moultrie, Georgia finished 3rd with 37.3lbs. Team Flippin Out and their winning fish are pictured below Thank you to all of the volunteers, sponsors, and participants that helped make the tournament such a fun and successful event.  The tournament has seen a nice increase in participation each of the first 4 years and went from 50 total entrants to 84 in 2015.   We look forward to continuing to grow the event and will plan to have the tournament in 2016 on the first Saturday of Federal Red Snapper Season.  Here’s a link to see more pictures of the tournament on the GollyWhopper Facebook page.  We hope you will support all of the local fishing tournaments.  The Big Bend Saltwater Classic is June 19th-21st, Mexico Beach Offshore Classic is July 24-25th, and the MBARA Kingfish Tournament is set for August 29th. Below is the list of boats and captains that entered the tournament along with the divers.