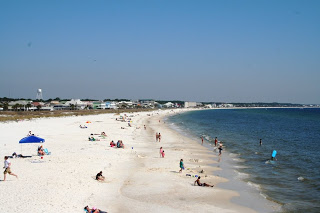 Are there still some really good deals? Yes.  If you look at price points since 2000, we are still very near the bottom of the market.  Selling prices have trended upward over the last 2-3 years, however not nearly as much as most people would think with this many sales.  One reason we haven’t seen big gains is that for almost every property that has sold the last 2 years, another has been put on the market.  We started 2013 with about 725 properties for sale.  Despite over 1233 sales in the last 2 years, there are still 590 properties on the market today.  The good news for values is that we aren’t seeing the numerous short sales and foreclosures that drag prices down.  We are also starting to see more sellers that won’t sell until they can get a higher price than what the market has been bearing.

Numerous buyers in 2014 found that building a new home was their best option.  More single family homes were built in 2014 than any year since 2005.  There were 83 homes completed in Gulf County and another 62 homes are currently under construction.  This does not include the City of Port St. Joe which has a separate building department.  Mexico Beach had 18 homes constructed, up from 9 in 2013.   With an average selling price of a single family home breaking $400K, building has often made the most financial sense on The Cape and Indian Pass. (The $378,751 average selling price for homes referenced in the 2nd paragraph includes townhouses and condos)  The Cape, especially the North End, has been on fire with sales and construction of new single family homes.  The new construction option has held back the price increases for existing homes.  This isn’t a bad thing, but buyers simply aren’t going to pay $500K for a 10 year old home when they could buy a comparable lot and build the same house brand new for $400K.
The majority of buyers today are purchasing because they want to use a property now or in the future.  We’ve seen over the past 10 years that hundreds if not thousands of purchases from 2000-2005 were bought strictly for investment.  Many of these were foreclosed on from 2008-2012.  We’ve seen a 2nd wave of sellers the last 2-3 years.  It’s been comprised of the owners that aren’t in foreclosure or necessarily distressed, but rather sellers taking advantage of a better market to sell their investment properties.  The majority of investment/speculation purchases during the boom were for vacant lots.  This market experienced high numbers of foreclosures and a huge decline vs existing homes.  An odd phenomenon was created in parts of our market where building a brand new house became less expensive than purchasing an existing home.
On average, I feel the market went up 3-5% in 2013 and about the same in 2014.  There are certainly submarkets and neighborhoods that went up much more.  A fair number of buyers that bought 2-3 years ago have seen appreciation of 20, 30, 40% and more.  The owners seeing the largest gains are those with property near the beach where the number of properties on the market is getting low.  I was wrong with my prediction for 2014 and thought prices would go up more than they did.  I didn’t predict that so many new properties would come on the market.  Inventory is finally starting to go down.  Especially inventory that is priced competitively compared to similar properties that have sold.  I’m having trouble finding buyers for certain types of properties at this point.  These buyers are willing to pay full current appraisal value and can’t find sellers willing to sell for these amounts.  I’ve written letters over the last 6 months to many property owners that don’t have their property on the market to see if they want to sell.  Very few have been interested in selling.  Those with an interest in selling have told me that they won’t sell unless there’s a big increase in prices.  If you are potentially interested in selling, I’d be happy to give you a free, no obligation evaluation of your property.
I began my real estate career about the exact time coastal real estate values started falling in late 2005.  The market didn’t make sense, and I was in for a rough start.  By the end of 2006, I’d sold a whopping 2 properties.  I’m entering my 11th year of selling real estate in a place that I love to live.  I have been very fortunate to learn from and meet a lot of great people.  It’s safe to say that my past 2 years were much better than my first two.  I have sold over 135 properties since 2013 and it’s been considerably more fun with prices going up instead of down.  I  was able to beat over 200 Realtors in 2013 and finish as the top producing agent on our MLS.  I had another great year and ended up 3rd in 2014 with the title going back to a St. George Island based agent.  98 Real Estate Group is entering its 5th year in business, and we have closed over 375 transactions totaling over $80 million.  We have established a strong presence as one of the top producing companies in the area.
Everything points to prices continuing to rise in 2015.  In my opinion, the 2 keys to seeing larger price increases throughout the market in 2015 will be to see a decline in the overall number of properties on the market and an increase in vacant lot prices.  If the lower priced properties on the market sell between now and Spring, buyers will be paying 10-15% more this Summer for a property near the beach than they did last year.  If you’re in the market to buy, I would have a sense of urgency to purchase before Memorial Day.  If you’re an owner considering selling, there’s a good chance you’ll be able to sell for 10% more in 2016 and holding might be your best option.  2015 should certainly be an exciting year, and I’d love to help with any of your buying or selling needs.
The following is a list of some fun upcoming events:
Gulf County Chamber Annual Dinner – January 29
Junior Service League Gala – February 7
Mexico Beach Gumbo Cookoff – February 21
St. George Island Chili Cookoff – March 7
Lions Club Sportsman Banquet – March 12
I hope to see you at some of these.
Happy New Year,
Zach Childs
Broker/Owner
98 Real Estate Group
850.819.0833
[email protected]